An average gain of 14 lbs among women and 16 lbs among men, since 1990. 14 lbs. 14 FUCKING LBS. THIS is the fucking obesity epidemic? THIS what I’m getting oppressed over?

A weight gain that can likely nearly be entirely accounted for by an aging population and smoking cessation?

Fuck you fucking healthists who’ve been pushing this fat panic bullshit ever since the lowering of BMI thresholds. Fuck you in the government for getting rich off panic-mongering and appropriating funds for giant new bureaucracies whose stated goal is to experiment on an entire generation of children. Fuck you employers for your ‘employee wellness programs’ that cause financial hardship to fat people who are penalized for having the wrong BMI. Fuck you insurance companies for profiting off the panic by charging fat people more for their policies. Fuck you stupid fucking economists who do assumption-laced back-of-the-envelope calculations that suggest fat people are responsible for global warming. Fuck you private and public foundations for issuing giant grants to anyone who does a study that finds in the negative for ‘the obese,’ and fuck you researchers who take that money.

The ‘obesity epidemic’ isn’t real, folks. It isn’t real. It isn’t fucking real. Welcome to the Theatre of Panic, Hate, and Other Shameful Social Tendencies. They say life is a stage. Well, I want fucking OFF of this one.

(cross-blogged on This is Thin Privilege)

Some of you may have seen the news that it is now illegal to be fat in Japan. This means having a waistline over 85 centimeters (33.5 inches) for men and 90 centimeters (35.4 inches) for women over 40 years of age.

I’m not sure what the penalties are. I know there are employment penalties, like weight ‘counseling.’

What’s most alarming about the article is that it’s screamingly clear this is a case of outright scapegoating. Official admit that fat people are being targeted because the population is aging, and aging-related diseases that have been mischaracterized as caused by fat, like diabetes and heart disease, are going up. So fat people are being targeted, even though this is clearly a statistical issue tied to a changing demographic, and not anything the Japanese public is doing differently or ‘wrong.’

My heart goes out to all fat Japanese. I hope your government sees the error of its ways, though it’s incredibly unlikely.

For several years I’ve had the domain biglibertyblog.com. Due to a WordPress snafu, this domain is now no longer under my control. Instead I’ve purchased bigliberty.net. Please update your links, especially if you’ve linked to my Truth About Fat: References.

bigliberty.wordpress.com will continue to work ad infinitum, and will redirect to bigliberty.net eventually.

Sorry for the inconvenience!

I was going through some photos and was amazed to find this one — I forgot I’d taken it. It was the summer of 2010, when I was up at the University of Vermont for an event. Sorry for the graininess, it was taken with a not-ideal cellphone camera. Text below. 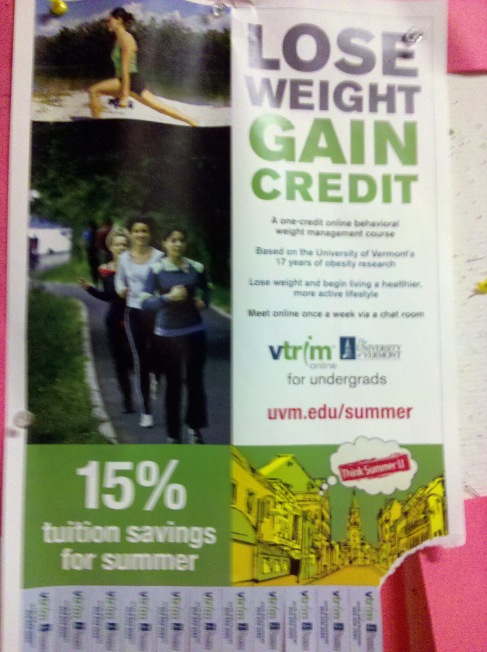 I know 1 credit isn’t a lot, but I just … urgh … when it comes to the idea of offering university credits for weight loss. Also, note the pictures: all thin women.

I hope all my lovely fatties, inbetweenies, and thinnies are having a great New Year’s.

Already the Fat Hate Month (January) has been warming up: I was watching something on a woman-geared channel (I think it was Style), and nearly every commercial was about body hating or body snarking. There were even advertisements for a new show called, “The Ten Things I Hate About Me” (ugh).

However, the Fat Hate Month is also a usually a good month for FA recruitment (especially near the end of the month). Indeed, it was January, in the midst of the Fat Hate ads, shows, and so on, was when I created this blog.

So when your friends and colleagues get weary of January dieting and exercise binging, point them to Big Fat Blog, Shapely Prose, here, The Fat Nutritionist, The-F-Word, and other great FA sites. (Rachel’s The-F-Word was the first FA blog I came across, ever. It blew my mind, and I was hooked).

In other news, since I’m not a huge fan of Resolutions, I’ve made a list of ANTI-Resolutions. Yep, Rebel Without A Cause, to the end…

1. DO NOT sell myself short.

2. DO NOT base my self worth on my appearance.

3. DO NOT wear ugly, ill-fitting clothes, unless engaged in home renovations or working out.

4. DO NOT take my eyes from the sky. Dream, and achieve my dreams.

Do you have any Anti-Resolutions?

For those of you who enjoy looking at pretty pinups and nice art, I give you the Toil girls. Enjoy the gallery and backstory!

This is a friendly reminder that bigliberty.wordpress.com is moving to biglibertyblog.com tonight. Please update your links, as this will break any links you have made to this site within your posts, or in your blogroll. The path for the Fat Liberation Feed is remaining the same, so for everyone who reads Big Liberty through the Feed, you’re all set. 🙂

As of Friday, Big Liberty will be moving from bigliberty.wordpress.com to biglibertyblog.com. That’s right, my own domain name! <<sniffle>> 🙂

After a month or two, Big Liberty will then be moving to its own host, which will feature an FA forum, in the same spirit of the forums at Big Fat Blog, which will be going dark within the year.

I’ll keep everyone updated here and at Big Fat Blog as to when the forums will be going live.

I’d like to extend a very warm welcome to my new co-blogger, the witty, well-read, well-reasoned, well-endowed AnnieMcPhee!

AnnieMcPhee is a long time fat activist blogger (of the blog Boombatti), and was one of the main people who encouraged me to start the Fat Liberation feed. Her main blog is Purely Politics. Partisan? Perhaps. She’s a soul-sister, soul-mate, and soul-fattie.

That’s right, it’s my one-year anniversary. Well, sort of. I kinda missed it (it was three days ago).

However, we can still celebrate. It’s been one interesting journey, which I was glad to undertake, and which I hope to continue for a long time.

Big Liberty was my first ever blog. Now I’m the main author of three blogs, two feeds, and I contribute to another blog. Big Liberty is my only anonymous blog, and I plan to keep it that way.

As of today this blog has 52,785 hits. Wowzah! Several times during the early days of the blog I got on the top 10 list of growing wordpress blogs.

Again, there’s the sense that one has to “get in shape for her gown,” rather than, yanno, buying a dress that fits. Have we so ritualized the wedding day that the wedding dress has become more like a priest’s robe a woman must fast and self-harm in order to earn?

If the Tall Epidemic’s health concerns (see above), as terrifying as those correlated with the Obesity Epidemic, were given as much attention as those of the latter, surgeons would be proposing procedures which have been shown to cause great long-term difficulties to the patient but have the (at least temporary) effect of reducing the evil toxic fat (like bariatric surgery, lap-band insertion, liposuction, electrical shocking of the hippocampus). These potential surgeries could include leg-bone shortening, bariatric surgery in young children to reduce the nutritional absorption from food so that their growth is stunted, electrical shocking of the area of the brain that releases the hormone involved with height, imposed osteoporosis so that bones become more brittle and result in an effective shortening of a few inches, and so forth.

I’m positing a possible catalyst to the “Obesity Epidemic” moral panic and the “War on Obesity” moral crusade: an aging population who is afraid to die, and are desperately seeking a Fountain of Youth for both themselves and their children. Weight gain is associated with increasing age (at least until about 60-65), and that’s right about where the Baby Boomer generation is, now.

3. Fat Discrimination Inevitable in the Next Presidency

A fat acceptance activist would be hypocritical to support any of these candidates, given their anti-FA beliefs about fat, obesity, and required government intervention. Furthermore, there is every indication that they would vigorously promote those same anti-FA beliefs, spending tax dollars on ignorant and biased programs that would only serve to in one way or another harm future generations of Americans.

4. BeingGirl – For Girls, By Liars

Note – the site was changed/discontinued after a few posts in the Fat Community (including this one). Huzzah!

“BeingGirl: For girls, by girls,” a site hosted by Proctor & Gamble, is one of those places that draws in teenage girls with cutesy graphics and shitty writing (by the staff), and better writing which populates the rest of the site (posts by the girls themselves). Some of the posts are heartbreaking, and the articles themselves (esp. the ones concerning weight) are filled with virulent lies, and ‘methods’ of weight-reduction which read like a pro-ana site.

5. Dealing with Life in a Fat-phobic Society

Fat-phobia is omni-political. One political group does not discriminate or hate fat people more than another. Some so-called Progressives and left liberals consider fat people to be a representation of the materialistic, consumption-obsessed dynamic they despise. Some so-called libertarians believe fat is voluntary and fat people will somehow increase the tax burden. Some so-called conservatives believe fat is synonymous with anti-Christian gluttony, and is therefore undesirable. Some fascists believe if fat people had their diets and behavior properly controlled and directed, they would no longer be fat.

6. Why Universal Healthcare Should Be Opposed by Fat Activists

This one’s close to my heart, especially since it seems to have been a bit prophetic.

As such, the individuals appointed to regulate healthcare and hence our bodies will be appointed ultimately by politicians. More likely politicians will “contract out” appointments to whatever healthcare organization lobbies the hardest, or has the most friends amongst the Washington elite.

When it comes down to it, the people who have the power to control your body, and by extension your behavior, will be those who crave the greatest power they can get, and will appeal to the electoral body and the misconceptions and fears of that electoral body for healthcare decisions about your body.

Here’s to another year! Laugh, love, and fight the good fight!

Hot Off the Presses