This morning Kath at Fat Heffalump had yet another brilliant post about the Freedman/Cannold debacle. If you aren’t familiar with the rights of the debacle, they are, in a nutshell:

Freedman says some not-so-nice things about fat people and fatness on Twitter. Specifically, Dr Samantha Thomas broke an ironic screenshot of Freedman saying, “If you have to ask, your bum does look big in that. #rulesforlife”

From anyone else, it’s a shallow, classic trollish tweet that should be promptly ignored and filed away into oblivion like every other immature tweet of its type. But Freedman is 1) a grown woman; 2) a body-image advocate.

But don’t worry! Whenever there’s angry fatties responding to a celebrity troll, there’s a well-meaning journalist buddy to rush in and save the troll, white-knight-style. Cannold, a friend of Freedman, pens this. Besides her shocking tear through the land of logical fallacies and fat hatred, she actually says, in all seriousness, that “it is also the case that being obese or underweight are risk factors for mortality.” So the normal BMI are immortal, now? Forget hounding on fat people, Cannold needs to go back and re-take English Composition 201. It makes me sad that she gets paid to write nonsensical garbage like that, and the more-talented bloggers like Kath construct their careful, well-researched arguments for free!

At any rate, read Kath’s first post on the issue to get a better breakdown, and then her most recent post about fatshion. In short, Cannold claims that fat people dressing up nicely and blogging about it means fat people aren’t allowed to criticize mainstream beauty. No, really. Then she stretches this specious analysis to conclude that since us fat fatties are all just a bunch of clownish hypocrites, we can’t say a damn thing about Freedman’s blatant hypocrisy. So leave her alone, you heavily-makeupped obeses!

Kath courageously turns that argument on its head. She presents fatshion bloggers, their pictures, and their testimonies as to why they blog about fatshion (and, shock, none of it has to do with desperately wanting to be like the popular kids! I mean, thin models). Kath’s post inspired me.

I’ve never showed myself here, besides the mugshot on the sidebar. Well, there was that wedding photo from a while ago, but I scraped that. I was nervous about showing myself — not because I was afraid of being judged, but because I don’t have anything to show in particular and don’t really want my picture being bandied about the internet. But, you know what, fuck it. I’ve blogged about fatshion from time to time, and it’s something that interests me. I love beautiful clothing, and over the years dressing my 6′ 0″ female body at varying weights has been a real challenge. It’s turned me on to what works and what I like, and more importantly, what I don’t like.

So here I am, wearing a gorgeous maxi from eShakti and a corset belt from Torrid:

Here are my further comments from the Kath’s post, which I hope explain why I’m finally “coming out” with my picture, and my love of fatshion.

Further, doesn’t this also ring true for the vast majority of thin women, who will also never look like the airbrushed models on the covers of magazines? Heck, those models don’t look the airbrushed version of themselves! The standard of beauty is no longer just a shrinkingly tiny percentage of the human population — it’s gone entirely digital.

Cannold’s statement is a classic attempt to undermine something she sees (or perhaps only feels on a visceral level) as powerful and threatening. How should we respond?

Feel good about ourselves. We’re making a difference. Our courageous fatshion is shaking the foundations of their exclusive club, and they don’t like it.

What should we do now? Cower down, strip out of our gorgeous maxis and slink back into some polyester tent? 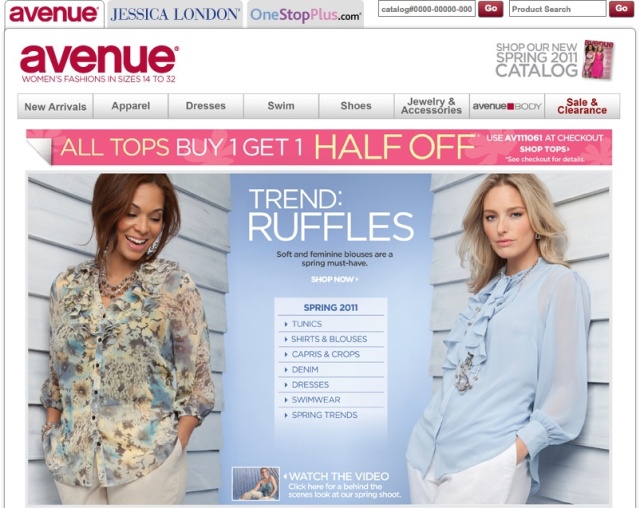 OMG, finally! I’ve been waiting forever, I thought the day would never come when someone said, “Fat girls and ruffles? Made in Heaven, obvs!”

So glad Avenue’s picking up the ball on this one. And what a TRENDY trend. So new. Fresh, even. Ruffles. Fat girls. Who’d’a thunk.

Everyone who’s ever even just brushed against fat acceptance needs to read this post:

MadameThursday: “Body policing and fat hate are related, but they are not the same”

My favorite bit (though it’s hard to choose):

When you go to apply to a job, the decks will be stacked against you. You will get laughed at sometimes if you go to apply for a server at a restaurant where the owner obviously wants to hire only skinny, blonde teenagers and college students to serve wings to his clientele. You will have an HR manager or an interviewer raise an eyebrow and ask you what you’re doing there. You will walk into an office full of people who look at you and wonder where you came from because you can’t possibly there to work with them in that smart, high pressure environment. You’re too fat to keep up with them. You will have your very ability to do a job put into question at first sight just because of your size. You will have your work ethic put into doubt. You will have your intelligence and morality put into question. You will have someone calculating the costs of giving you employer-provided health insurance if they hire you as part of consideration as to whether to hire you – and the thin applicants won’t.

I saw a great piece out of Cato not too long ago that I’ve been meaning to link. It also references an upcoming book by the authors Patrick Basham and John Luik: Diet Nation, Exposing the Obesity Crusade.

How the War on Obesity Went Pear-Shaped

One gem in particular, which should get you to want to read the full article:

Strangely, the obesity crusaders remain unaware that there is an absence of scientific evidence to support their assertions: firstly, that overweight and obesity increase one’s mortality risks; and secondly, that the overweight and moderately obese should lose weight because such loss will improve their health and lower their risk of heart disease.

In fact, the obesity crusaders’ assertions about weight and longevity ignore 40 years’ worth of international data that suggest obesity is not a cause of premature mortality. Many studies for different disease outcomes have demonstrated that the effect of both diet and physical activity are independent of the effect of BMI or various measures of body size or fat.

Oh, and in case that only whetted your appetite, here is another lovely article from the authors – Healthcare for All! Unless You’re Fat

And a teaser (please read the full article):

An NHS health trust now proposes to stop sending obese people and smokers for certain operations. NHS North Yorkshire and York is planning to stop patients who smoke, and those with a body mass index of more than 35, from having routine hip and knee surgeries because their unhealthy lifestyles allegedly lower the chance of the operations’ “success.”

Such discrimination on the grounds of lifestyle is illiberal and encroaches on individual rights, and is arguably beyond the legitimate function of the state. Refusing medical treatment to an individual who not only requires it but who has has financially contributed more than the average to its funding, as a means of coercing him or her toward healthier behaviour, is undemocratic and borders on tyranny.

Woo-hoo (sound of BL cheering at her screen)!

Here are some other great obesity-related articles from Cato (note that there are a lot of great science-related citations in the articles, so if you’re a collector of such things, do take that into account):

Hi, all. First of all, I apologize for my scarcity. A lot’s been going on in Big Liberty-land, some of it good, some of it not-so-good, and lots with potential to go either way.

I don’t usually blog about personals, but fat acceptance has been getting awfully personal for me, lately. It’s been on display in my writing, walking around with me in a suit at a high-powered conference in Manhattan, and making new friends. It’s there when I wake up, and tucks me in at night.

I say ‘fat acceptance’ rather than ‘fat’ because in Western Society you can’t just be ‘fat’ and leave it at that; fat’s something you are required to accept or not, seen as a choice by most, and used to your detriment in nearly every area of life. Want to date? You better make sure to tell them you’re fat, or risk being labeled as a con-artist of the flab (conflab?). Want that new job? Better hope they guy/lady who interviews you isn’t a biased fuck. Want to address that chronic pain in your hip? Better have your HAES gun locked-and-loaded, in the nearly-inevitable circumstance your fat is blamed for your ailment, or the sacrifice of which is suggested for the future of your health.

On that note, please read Red3’s post about the medicalized death-threats constantly leveled at fat people and parents of fat children. It’s superb.

So I walk and wander, accompanied by my fat acceptance. What choice do I have? Before finding fat acceptance, I was chained to fatphobia for most of my life. Fatphobia is a vicious companion, turning one against others and oneself, in need of constant feeding, and always pooping on the good rug.

Fatphobia damaged me: it was in the fists of the kids that beat me on the playground; it was in the words of family who wanted me to shrink for ‘my own good;’ it was in the tortuous loops round the college campus as I worked off no food, hopped up on diet pills; it’s in the flutter in my chest, the silent echo of how far I was willing to go to be the woman I thought everyone wanted me to be.

Fatphobia damaged others: sweet boys suffering, turned down because I couldn’t see myself as attractive; family disappointed, unable to see past this chance shell to the cultivated promise beneath; husband wounded, wishing only that his wife wouldn’t cry in frustration as she wonders whether she’s getting passed up for promotion because of her size.

So I keep fat acceptance close. This fourth year of my journey is no easier than the first, but far easier than navigating the briar patch of self-hate. Lots of FA bloggers have come and gone in the meantime, others have slowed their posting or sped up, and there are many new faces. We are doing well; we are changing lives; our message is getting through. We must continue. And keep fat acceptance close to you, when you’re busy and can’t find time to write. I know I will.

Hot Off the Presses